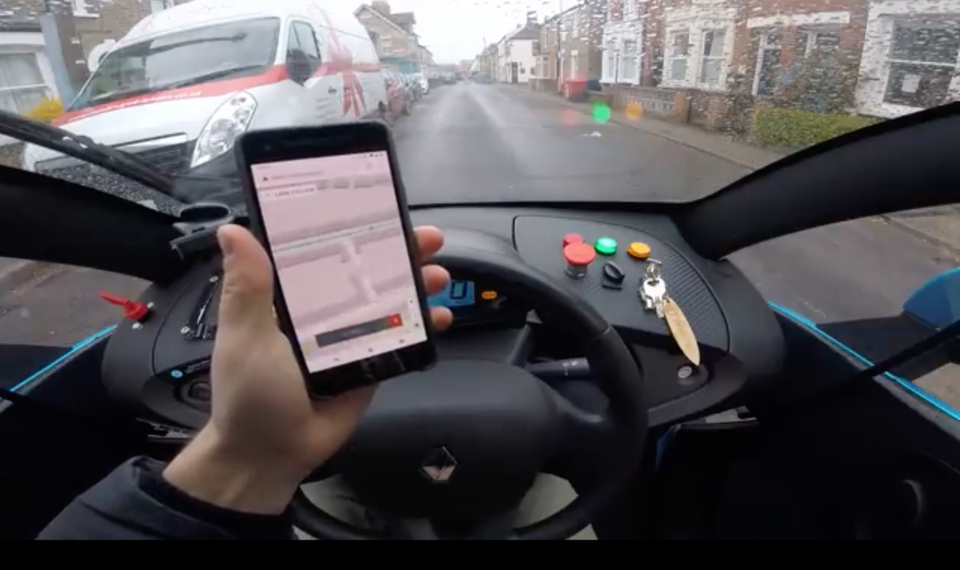 Wayve’s deep learning self-driving technology platform uses only cameras and consumer-grade navigation system to get a vehicle to its destination.

It’s a solution that Tesla CEO Elon Musk would approve. No lidars, no high-definition maps. No hand-coded rules. A small startup in Cambridge, U.K. taught a car to drive itself in a simulated environment before unleashing it on the road equipped only with cameras and your average satellite navigation system. The result: a self-driving car that could navigate complex new environments in a day.

Wayve.ai is taking an end-to-end machine learning approach to building a self-driving car. Rather than create a platform and feed the rules of the road, their system uses imitation and reinforcement learning coupled with cameras and sensors to control the vehicle and follow a route entered in the navigation system.

This model-based deep reinforcement learning system gives it the ability to learn to drive like a human in new environments based on data either given or learned from past experience. It’s different from other autonomous platforms because the car creates all the rules itself and evolves based on safety driver interventions rather than relying on engineers to feed it new data.

It’s this differentiation of what the company calls “end-to-end deep learning” that makes Wayve’s self-driving platform scalable to new areas. At present, most autonomous vehicle systems use high-definition maps, lidar, and other custom technologies to build a 3D world in which they can identify objects and signs and learn where it is and where to go.

Wayve forgoes expensive lidar or data-intensive HD maps. Instead, the company’s technology is based on multi-layer neural networks and computer vision to predict motion of objects in an urban environment. Their algorithm means that you can take a Wayve vehicle and put it in any new area and it will leverage its past experience to adapt quickly to new environments, including rain and snow.

And that’s exactly what the company did. Last week Wayve.ai posted a video of a vehicle traversing the streets for the first time in the rain, successfully navigating complex turns and avoiding cyclists after learning from only 20 hours of training data.

Although the technology may perform well in real world scenarios, it’s not clear if would have enough experience or how much it would take to appropriately handle edge cases, and the open road is not an acceptable testing ground to find out. Then there is the ability to figure out what went wrong in the even that, much like humans, it makes a mistake and causes an accident.

Despite its early testing phase and the unknown legality of the technology,the company wrote on its blog, “We’re going to be the first to deploy autonomous vehicles in 100 cities.” That is a strong claim to make when companies like Waymo are already in operation. But to Wayve Co-Founder Alex Kendall’s point, Waymo vehicles are restricted to tightly geo-fenced areas, and it’s not clear when the technology will be robust and trusted enough to be free to operate on all roads. That could be never.

Kendall posted on Twitter, “The longer I spend working on this problem, the more I believe that it is too complex to hand-engineer and end-to-end machine learning is the only scalable solution.”